In spite of the importance of the fists in mixed martial arts competitions, and in spite of the fact that boxing has always been a full-contact event, MMA requires more than just the fists to strike with. Thailand has a tradition of mixed martial arts events going back to the earliest records. While boxing is arguably the national combat sport of the English-speaking world, Muay Thai is without dispute the national sport of Thailand. There is even a Muay Thai Day celebrated on March 17 in honor of the sport and its place in Thailand’s national culture and history.

Muay Thai is unique among historical full-contact sports due to a combination of several factors: the laxity of its rules, the length of time it has been practiced, and its enormous popularity throughout the millennia since its inception. Unlike the Roman pancratium, Muay Thai did not lose its popularity to other events; it has remained strong right up until today. It is thus the greatest example of a living, full-contact, mixed martial arts tradition. Modern kickboxing and the mixed martial arts style shoot boxing, both originating in Japan in the twentieth century, were inspired by it.

Nearby countries also practice the sport but under different names and sometimes with more extreme rules. The Burmese Lethwei traditionally had no rules at all. Even biting was allowed. A knocked-out competitor was asked upon revival if he wished to continue the fight. Only the acknowledged submission of the adversary enabled a competitor to win. An adversary’s simply refusing to submit no matter what occurred, including death, would result in a draw.

Muay Thai traditionally allowed striking with any part of the body. This meant that fists, elbows, knees, shins, feet, and the head were all used. Grappling was also allowed and was used for holding the opponent to deliver strikes and to slam the opponent to the ground. No part of the body was off-limits to attack, and some fighters specialized in striking the groin with the knee, foot, or other parts. Kicks were often aimed at the knee of the opponent’s supporting leg in order to break it.

As Muay Thai evolved as an art with military application just as wrestling styles did, the prohibition against continuing the fight on the ground is understandable. Fists were often wrapped in sturdy rope, and adding sharp materials to the rope was not unknown. Victory was attained by beating the adversary to such a degree that he could not continue the match. Thus, developing toughness was a key element in training. In more recent times the rules have been altered in favor of protecting the competitors more. Points are now tallied, head butts and groin strikes prohibited, and modern boxing gloves worn.

Come down to Arashi Do and try out one of our Awesome Muay Thai program.  We will help you succeed in your goals whether it is weight loss, general fitness, something fun to do or even competition.   All that and you get a 30 DAY FREE TRIAL and a Free Training DVD just for coming in! 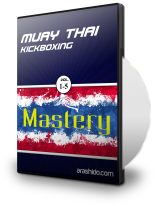